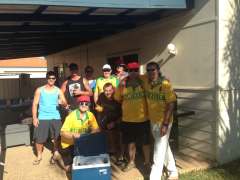 The beers had been iced

from the night before and Chef Hall had the BBQ cooked by the time we arrived at his place at 7.30am…like a well oiled (and we were by Mandurah) machine we pulled out on the Go West Bus with fellow sponsors Southern Lock and Security, Gard and Associates represented (sadly Spirit Radio, Warrick Welding and Nexus Insurance we not able to make it happen at this busy time of year)….no excuses for any product placement this year within reports.

the SMSs from the corporate tent started….Muzz with beer, Murray with canapés, Murrington (from Warrick Welding) with Gladstone Small (and his companion, Gladbags Big).

The Aussies dug in and we went to lunch over the road at Gloucester Park on the instruction of that wiley ol captain of the Dalyellup 3rds, David White. The full strength beer was a relief to the system although PD struggled with the fact that there was no red wonder on offer.

ef of having been in shade for a few hours, we headed back to the ground to brave the 40 degree heat on the plastic seats (check out the pic of Whitey shorts for an indication of just how hot it was).

We finished the day full of cheer as the Aussies had complied the biggest first day score at a WACA test. Only on thing to do, celebrate at one of the Dinos favourite watering holes, The Carlton Hotel where the render has completely gone now and the patrons have started picking at the brick mortar…expect a death at this joint any day.

Mike Atherton was good enough to have a photo with us on the way to The Carlton but needed it to be quick as he had a function to get to. I said no problems Mike and yelled at Muzz/Hally and Gunja who where about 200m away across the park. After he had got over his bizzy self (with an obscenity), I asked him if I could wrestle him for the urn in the pick. He said, ‘no lad, I’m not d

oing that and anyway you’ve already got that fooking thing’.

The Go West bus was delayed somewhat which had nobody complaining except Whitey as he had to play the next day. After an eventful trip (Hoost’s “Austray-ya, ya chicken is ready, austray-ya, ready right now, austray-ya, red red ready red rooster” will not leave my head), we arrived in Bunbury at a bit past midnight. The magnificent Terri Keech of Southern Lock and Security fame was waiting at Go West HQ to ferry the weary lads home.

As the pics tell, it was a cracker.

Next year there is no test but we will most likely do a one day-er.