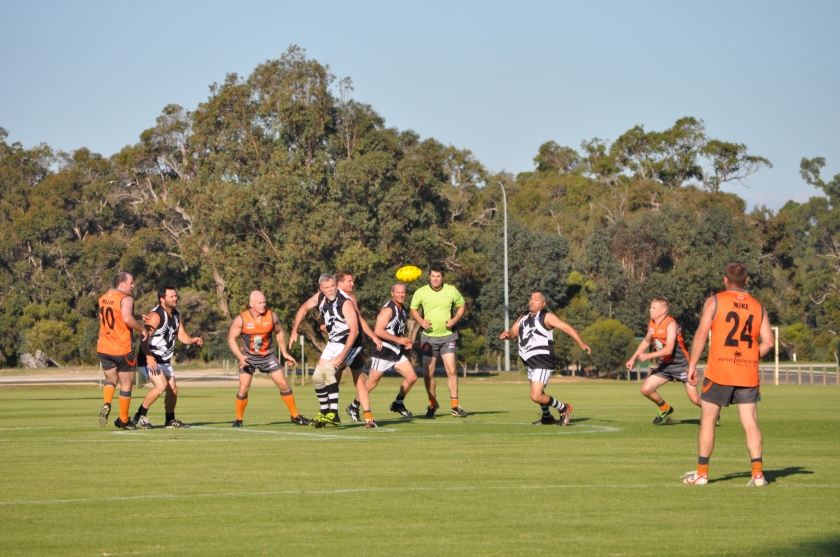 After the latest start we have had to a season, the first game was finally here and we were greeted with a magnificent day for footy…light to medium breeze and enough sunshine to see new boy Rick the fire starter, plastered with sufficient sun cream to put out an industrial inferno.

The Busso boys were a bit lighter on numbers than usual and requested a reduction in the minutes for each quarter to 15 mins. In previous years, we would have jumped at this but there was real apprehension in the Dino camp. After a solid preseason campaign, the majority of the Dally boys wanted the full 20 which is a big tick for Wal and Kev’s lead in sessions and will stand us in good stead for the rest of the year. We decided to stay with the standard 20 minute quarters for the first half and then drop down to 15 minutes if that was still what our guests wanted to do.

During the warm up we lost big Rick (not with sun screen poisoning) with a tweaked hammy which is a classic beginning to his Masters career but as if he was in a scene from Back Draft with backs to the wall and flames all around, he plonked himself at the drop of the ball during the game and handed off to the runners. Well done Rick!!!

The other boys in Graham, Dippa, Deebs and Karl (Fish) dressed in tangerine for the first time thankfully got through the kick to kick and looked primed.

The siren sounded and we kicked off 2015, kicking into a slight breeze. After we dominated possession in the early minutes, Busso entered their forward line and scored the first goal which we answered soon after and went into the break only a goal down thanks largely to the defensive efforts of our all star cast backline of Jonah, Hoggs, Rowey, Fanta, Dools and Shags. These boys have played a bit of footy together now and it showed.

The second quarter saw us retain possession and continue link up footy like we haven’t previously so early in a season…possibly our extra legs on show. Deebs continued his run out of the middle and will be a very handy addition to the Dino stable.

Miller was in a contested possession mood but not just on the ground as he pulled in a couple of pack marks which stopped their run.

Basky was pushing back from the centre and helped set a platform to rebound,

Griever was firing out his trademark bullet hand passes in the middle and Hainesy put in his best half of footy for the Dinos yet, gathering ground ball across the middle.

Our wingmen were getting space with Reever (not one blind turn for the game) and Macca clearly the speedsters on the park when we went down the sides. Of all the people on the ground, our ruckman in Hunts wanted the ball most…if he wasn’t tapping out to space, he was gathering on the ground or marking and running his opponent ragged.

Meanwhile up forward there was a storm brewing but we will get to that later. 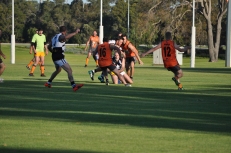 Hally was gathering possessions as if they were real estate listings and looking to bring into the game other individuals with a penchant for sausage rolls. Our president had put in a monster preseason and his appetite was obvious,

Kingy was getting hold of the pill, Muzz was charging out of the square with all the confidence of a man who could have worn yellow shorts but chose not to.
After a quick drink, a chat from Jonah about talk and assists we shuffled the board to give a few blokes different jobs and off we went into the last two shortened 15 min quarters.

Dools the dependable back man was now Dools the experienced umpire and he was soon to need all that history with a whistle in his gob to handle a spot fire. As we know, Muzz is not afraid to put his body on the line and not prepared to be on the receiving end without letting the other party know that it takes two to dance.

Muzza’s mark for the day received a bit of friendly fire and assumed Muzz had dished out a square up so predictably there was a bit of push and shove from a few of the Busso lads.

Unfortunately, Muzza’s young buck Jacko was in the area and seeing his old boy out numbered, offered his support. It all blew over with Dools handling it all very well which was shown in the lack of discussion about the tangle after the game. Well done to all involved as the circumstances could have seen it go another way.

We ran out the game in the last quarter with Basky, Deebs (2nd half in the backline), Rowey, Hainesy and Mill providing plenty of wheels right to the end.

Summary: Perhaps our best all round game at Jurassic Park with contributors from the back, middle and forward lines. We will need some of this form along with guys like Duffy, Juice, PD, Hutto, Gunga, The Blanket etc for our next game in a couple of weeks against the Crabs…easily the toughest assignment in SW Masters footy. I would also highly recommend Muzza’s Spa and Retreat after the game for some aged bourbon and bubbles for the weary legs….he’s open for business post most fixtures.

A big up to Dools for officiating the fights while a footy match broke out.

Thanks to Murray for managing Macca and I in the kitchen and then clearing out before the clean up duties began.

Kev on the chippy machine…free first bucket of chips for the kids was a winner.

Ebony McNaughton was a star in the responsible service of raffle tickets and helping with kitchen duties…Duke of Edinburgh awards awaits this young lady as she stood up to the pressures of the public while I was Dad joking her.

Manga shuffling the magnets and the burgers on the BBQ. Burgers from DBC were a hit and at $5 represented a hefty discount to the $13 Balingup Fair burger I had earlier in the day….the Busso boys were pretty happy with the $3 beers as well.

Soda and the gang for running water