Our first home game of 2017 had finally arrived and the chance for Splinter and Condo (Donk injured but on drone duties so will be interesting to see some game shots from the sky) to get their first taste of the tight Jurassic Park layout. This was also a significant game given it was the Past Times’s first visit to Jurassic Park with former Dinosaurs Frank Italiano and Pasties’s captain Scotty Sarre on board.
3.30pm rolled around and after embarrassing Mike Kelly with a lil ditty called ‘’Micky Juice’’ to celebrate his 50TH game, we ripped into it with Pasties kicking with the breeze. Each quarter went to the Dinos by a goal or two but the Carey Park boys didn’t let up all game and will be a strong unit in the future. 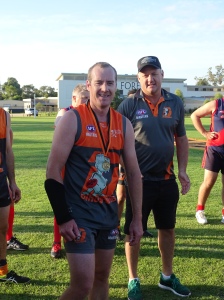 Best – Wal and Fanta. Rowey and Juice had plenty of ‘smell the cow’ moments, Botty presented well and can kick, Kingy rucked and rolled, Mill had the highest tackle count on the ground and Reever got a hospital pass which resulted in him getting ironed out (Donk has a ripper shot of it BTW which I believe is at the framers).

Congratulations to Dools and Hutto on a top job umpiring
which took the heat off the new boys to come up with someone.

Nice touch with the wheel barrow full of ice and beers after the game…taken from the Wongan Hills carnival and the new Dino tent debuted at the ground so innovation is alive and well at the DDFC.

Great to see old players Georgey Nichols, Wang, Squares and Foggs at the game. A few Shane Jones masks, a la Craig Turley in the 90s popped up around the ground which was also a nice dip of the lid to the former Dino who has been the driving force behind the Pastimes.

Preso’s came and went and the casseroles were very well received by all as was the raffled bottle of bourbon won by a Pastimer. Well done to Kev ‘’Chippy’’ Pears who with The Hoggans, (big up to Tash as well) organised the kitchen and to all the boys who helped sell raffle tickets and shell out the beers, softies and wines for the ladies. More rewarding than working for George Colombaris they recon in that hot little room on Saturday night. Excellent work by Leo for a great first game of manly manipulation….he’s still got the fastest fingers in the business.

Great standard set for the rest of the year….next home game is not until the end of June so plenty of time to plan for that.

Next stop, another first with our first game at Waroona on Friday Night 5th of May and another former Dino to tackle in Wardy and maybe PD if he’s about.

For Drone Footage head over to DINO TV page here

One thought on “Game 2 vs Past Times (Carey Park)”